Question: the hometown coin flipping team has staked out a healthy lead, in fact there’s a $\gt 99\%$ chance they bring home the championship (chip). Suddenly, disaster strikes, and they experience a total collapse and lose the game. If the game is a best of $101$ flips, what’s the chance to witness this devastating upset?

This problem is about devastation — games where our team gets to a point where they have a $99\%$ chance (or greater) to win only to completely blow the lead and lose the game.

By implication, there are points in the space of scores $(w,\ell)$ where there is a $99\%$ or greater chance for the Birds to maintain their lead and go on to win. If we can find the set of those points, $\mathcal{S},$ then the probability of witnessing a collapse is just

Here, $P(S_i\rightarrow\text{collapse})$ is the probability that after reaching the point $S_i$ (with $w \gt \ell$) the Birds go on to lose the game. We don’t care how the Birds makes it from $S_i$ to a loss, any path will do.

$P(\text{start}\rightarrow S_i)$ is the probability that a game makes it to the point $S_i.$ More specifically, it’s the probability that the game makes it to $S_i$ before visiting any other point in $\mathcal{S}$ — if it’s already been to $\mathcal{S}$ we ignore it since we don’t want to double count. The fact that we need to classify trajectories according to which point in $\mathcal{S}$ they visit first makes this quantity tricky to calculate. 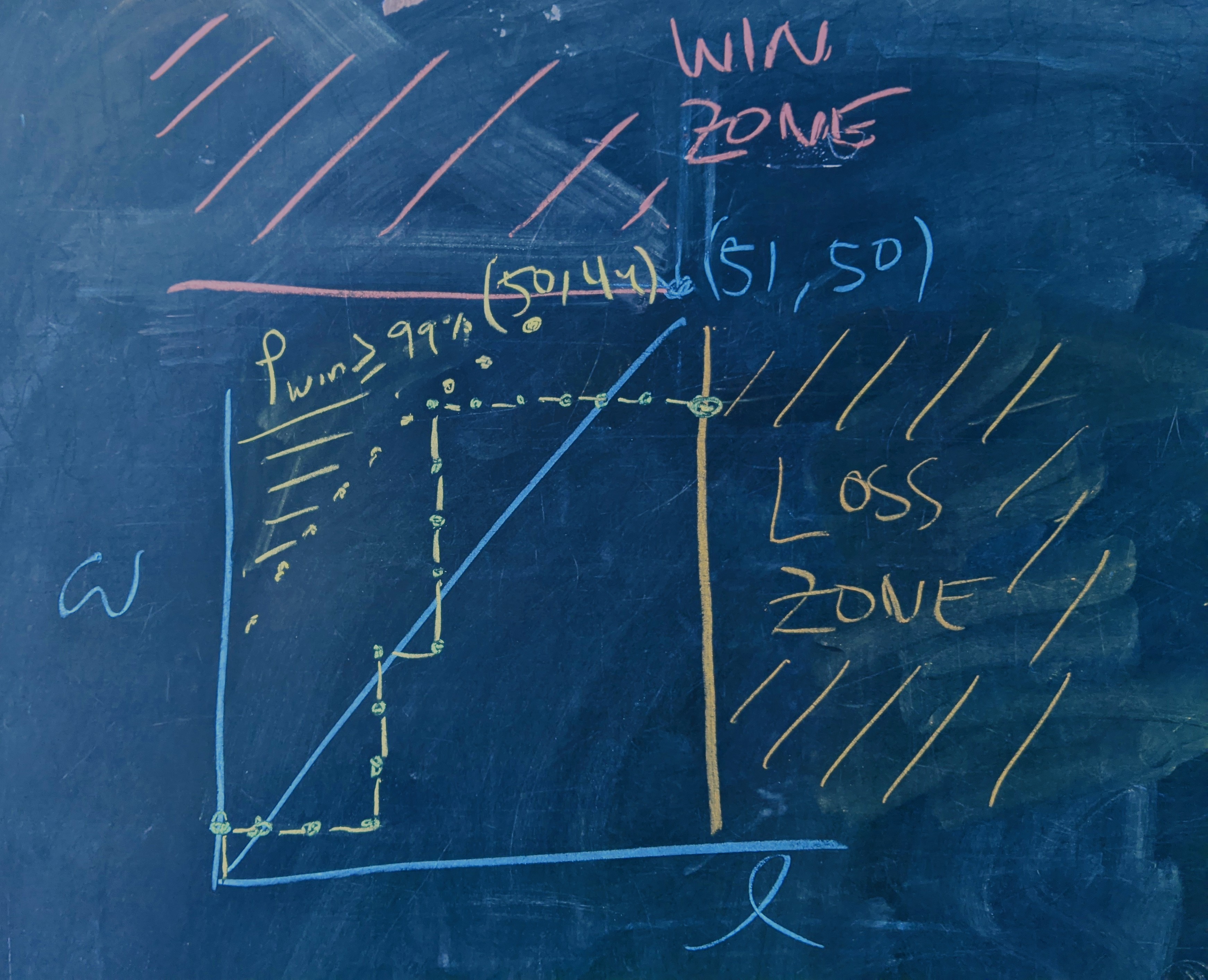 The Birds start things off with a lead, then go under, then rocket up to a point in $\mathcal{S}$ before completely blowing the lead and ending up in the $\mathbf{LOSS\, ZONE}.$

From $\mathcal{S}$ to an $L$ — the likelihood of collapse

If we can calculate $P((w,\ell) \rightarrow\text{collapse})$ then we can find the points of $\mathcal{S}$ simply by scanning the grid for points where it is $ \lt 1\%.$

Coding it up in Python

To find the probabilities $P(\text{start}\rightarrow S_i),$ an analytic approach for first visitation is tough since the points of $\mathcal{S}$ change their distance from the line $w=\ell$ over time. To get around this, I deployed $1,000,000$ random walkers on the grid and kept track of the fraction of the time that a point in $\mathcal{S}$ was encountered. As soon as either one such point was encountered, or the line $w + \ell = 101$ was encountered, the run stopped and a new one was started.

First, we make a dictionary to store the probabilities for all the points of $\mathcal{S}:$

Then we deploy the random walkers:

The total probability of arriving in this set is found through

For many points $(w, \ell),$ the first passage probability to $(w, \ell)$ is significantly smaller than the arrival probability given by enumerating the trajectories to it, which is what we can do risk-free for $P(S_i\rightarrow\text{collapse}).$ This indicates that a large fraction of trajectories to points in $\mathcal{S}$ encounter multiple $S_i$.

However, Emma’s model is actually a huge success in the continuum limit. In the continuum, there is no guesswork about the value of $P(\mathcal{S}\rightarrow\text{collapse}),$ it’s actually equal to $99\%$ on the nose for the frontier of $\mathcal{S}.$ If we replace $99\%$ with the generic $1-f$ then